Stories from the field

How one woman returns to Bulgaria and succeeds to start a responsible business that supports cultural heritage preservation, gives work to local artisans and supports vulnerable migrant women

18 years ago, Lyouba Asadurova, from Varna, is a fresh university graduate who decides to move to the US fascinated by the freedom and the multicultural environment there.

‘I chose the USA because of the ideas the state has been build on. I’ve met so many amazing people from different places and cultures, which enriched me as a person. To be living among all those cultures in New York while living in just one place was priceless.’

Not long ago she returned to Bulgaria bringing with her invaluable professional and life experience. Back in Bulgaria, she sensed that new nationalistic movements had emerged and were spreading ideas that misrepresent what Bulgarian identity is. ‘I was really sad to see such developments, because my country has always been a melting pot of cultures, ethnicities and religions since its inception. This is the reason to wish to support people that are currently marginalised in our society.”

Lyouba founded Nomad.ist - a business that supports heritage preservation of the traditional weaving artisanship and the richness of local cultures together with the development of small economies, while rethinking the concept of what a home is. She creates the carpet’s designs, which are then made of natural materials by local artisans, and sells them online.

My business with carpets has happened in a very natural order. I had the idea, I started thinking about it and then everything came into its place. I’ve always been fascinated by the idea of ‘home’, what is  home, where is home, because when you move from place to place, you must create your home again and again. A carpet is an essential part of home, it creates a concrete space.’

Carpets have always been an important part of folklore and artisanship and with her business, Lyouba wanted to put the local economy in focus and for this reason she searches for different artisans who have preserved the authenticity of hand waiving, with whom she now works. Currently she works with Dzef Studio in Varna, who have been internationally recognized for their work to preserve  the tradition of hand waiving in Bulgaria. 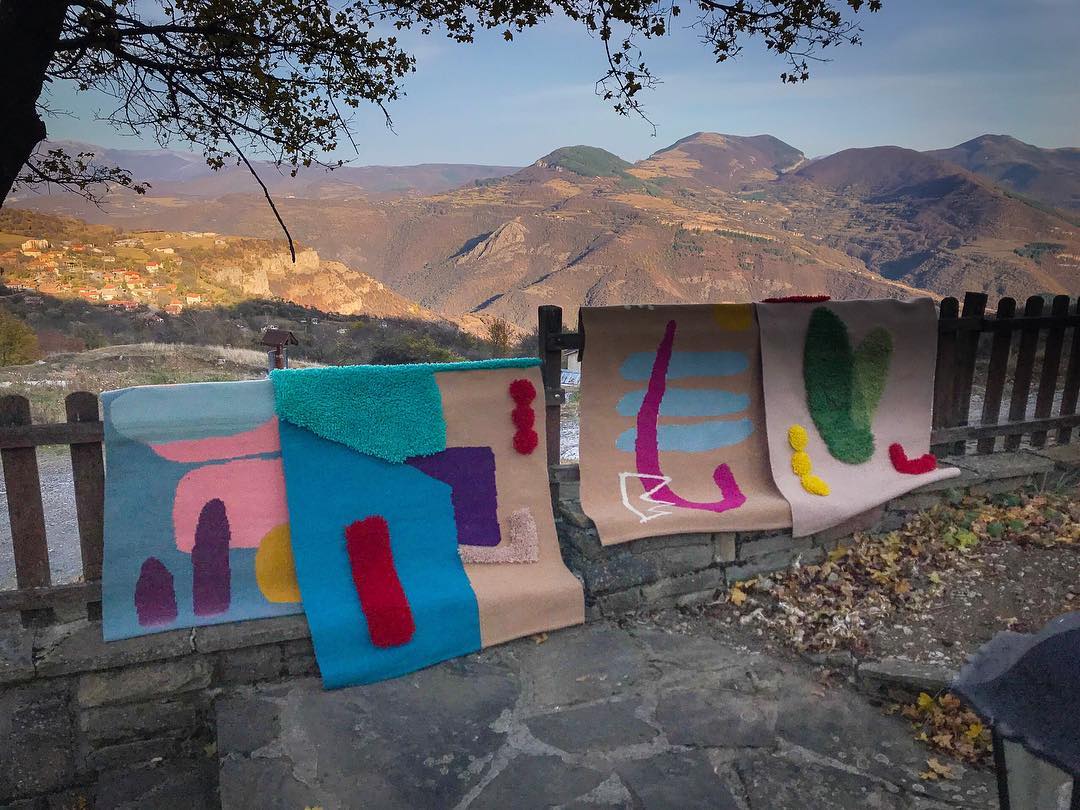 Nomad.ist combines the traditional Bulgarian waiving techniques with modern design. The designs created by Lyouba are very different from the typical Bulgarian geometric forms. ‘It’s like a new language, new perspective. I’ve chosen the name Nomad.ist, because I’ve always been interested in those people who are self sufficient, entrepreneurial and are on the move. The philosophy behind the brand is open borders. In my opinion, a state should not be defined on ethnic or religious values, but rather on human values. It’s not realistic to divide people, and history has shown that people will always find a way to come together, no matter the social structure built to separate them.”

Lyuoba chose to support with a donation the special program developed by Center for Legal Aid  - Voice in Bulgaria, which supports vulnerable migrant women. ‘I understand what a migrant woman has to go trough, because migrant women have specific problems. I’ve chosen to donate to a cause, which is important to me and I prefer to do something concrete like supporting this project rather then simply complaining that things need to change.’ Through Nomad.ist Lyouba also donates 15% of the value of every sold carpet to the Center for Legal Aid - Voice in Bulgaria’s program.

Migrant women typically have numerous vulnerabilities that need to be addressed, such as health issues, being single parents, the risk of trafficking and exploitation, limited access to the labor market due to residency status, childcare responsibility, etc. Often, embedded cultural barriers prevent them from seeking help and defending their rights. Negative attitudes towards them on the part of the host society nationals make it even harder to find accommodation or work.

Center for Legal Aid - Voice in Bulgaria has been providing pro-bono legal aid to asylum seekers, refugees and migrants for 10 years. In September 2018 with the financial support provided by the volunteers of Oxford Aid for the Balkans (OXAB), the center launched a special program to support migrant women living in Bulgaria who are in a very vulnerable situation: single mothers, with health problems, or victims of domestic or gender-based violence, etc.

The program has a holistic approach and in addition to legal aid consultations and court representation for their refugee procedures and other legal matters, the women are supported in visiting medical specialists, being accommodated in safe houses when in danger, supported in finding a job and the communication with employers, supported to secure childcare services etc. Currently, the women in the program are from various countries:  Iraq, Afghanistan, and African countries.

The ultimate long-term goal of the program is that after the women’s pressing problems are resolved, they will be able to manage their lives independently, to take care of their children and to be fully engaged and contributing members of society.

Should you wish to support the program of Center for Legal Aid - Voice in Bulgaria to support vulnerable migrant women, you could donate via PayPal or bank transfer (please stating as a reason for the transfer “Donation - Vulnerable Migrant Women Program”.